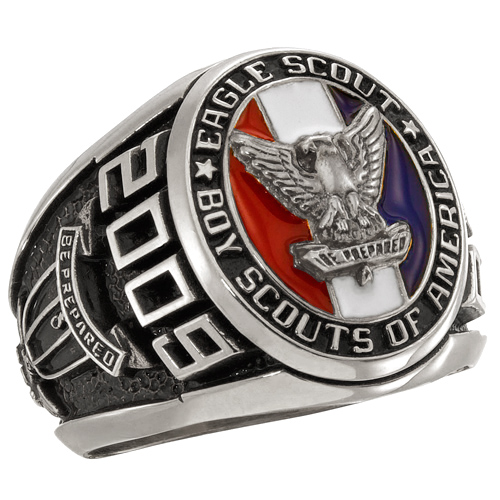 Ships in 4-5 weeks
Manufacturing Lead Times: This jewelry is made to order, requires sizing, or assembly before shipment. The "ships in" time refers to the time it takes for the jewelry to be made to order, inspected for quality, packed and prepared for shipment.

Loading the form...
Customer Apprecation Sale
$999.97
List price: $1299.97
You save $300 today!
View Customer Q&A
Ships in: 4-5 weeks
STEP 2: Customize your selection below
When you have finished, please click the 'ADD TO SHOPPING BAG' button on the bottom of the page to add the personalized item to your shopping bag.

An amazing piece except...

I want to make it clear that I absolutely love this ring. I've wanted one for years and now that I'm an adult in college I finally decided to get one. It feels great on my hand and the engravings are absolutely beautiful. Nothing about the ring itself is wrong, it's the coloring in the badge design where the ring is weakest. I always expected the color to wear out eventually, that's just part of the ring aging, but I was not expecting it to happen so quickly. After only about a week the red began peeling on one side. Another week and a half later and half the red was gone while the blue began to peel. Eventually both colors wore out completely, leaving only the white strip in the middle. Again: I always expected this would happen, but not after only a few weeks of use. I'd still recommend this ring to any fellow Eagle Scout, but they should know that the color will not last as long as they expect it to.

Bottom Line Yes, I would recommend this to a friend

Bottom Line Yes, I would recommend this to a friend

Add Reviews to your site